The A.I.F. got their first real towelling at Lord’s this week from the Gentlemen of England

Outpost, Leaves From My Notebook, Star Green ‘Un (Yorkshire), Sat 28 Jun 1919, p. 1. . After having escaped defeat in their first eleven matches of their tour, the Australian Imperial Forces team had to bow to the inevitable at Lord’s yesterday 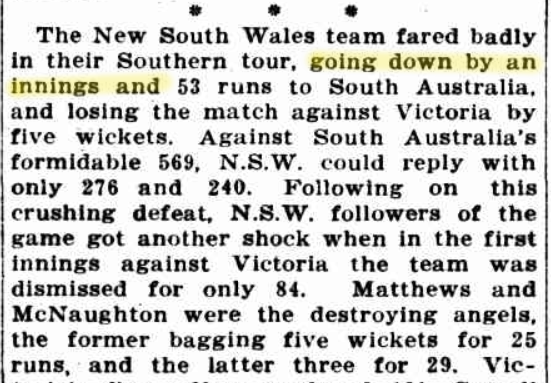 Not Out, Cricket Gossip, Arrow (NSW), Fri 27 Jun 1919, p. 5. http://nla.gov.au/nla.news-article103520533 . When someone mentioned how well a full strength English XI would have fared compared to a team representing the amateur talent of the country 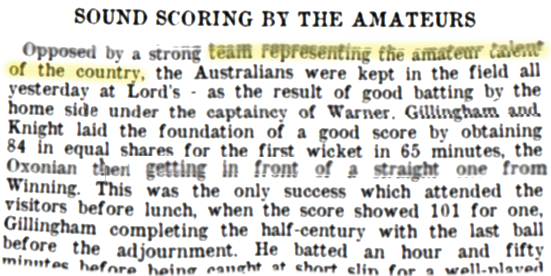 Australians v. Gentlemen of England, The Scotsman (Midlothian), Tue 24 Jun 1919, p. 8. , the Gentlemen in the long-room in the pavilion at 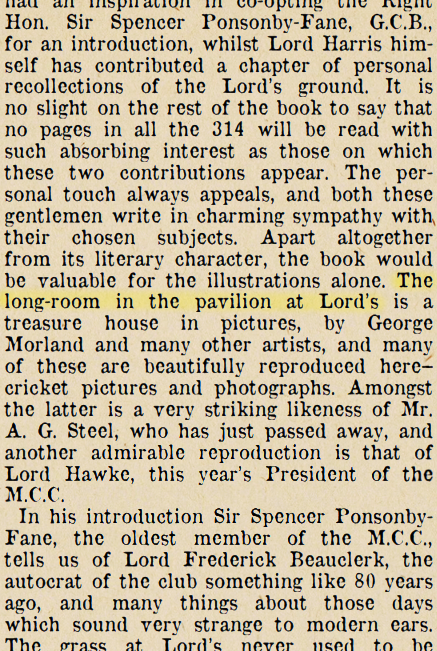 DieSwartzPunkt, The Long Room in the Lord’s Pavilion, 2010, photograph, https://upload.wikimedia.org/wikipedia/commons/a/a0/Lords_Long_Room.jpg , not all of whom were aware all of the Australians had fought in the war

Flashes and Glances, Star Green ‘Un (Yorkshire), Sat 21 Jun 1919, p. 1. , were reminded that the Australians were playing purely on an amateur basis 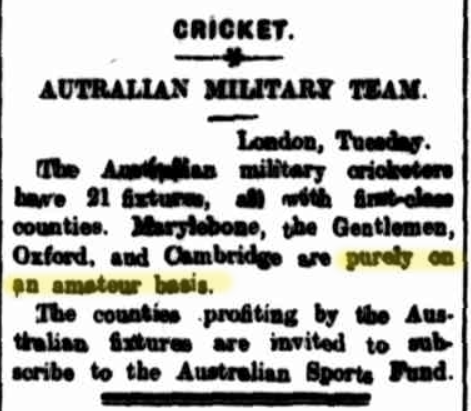 Australian Cricketers May Tour South Africa, The Herald (Vic), Sat 30 Aug 1919, p. 2. http://nla.gov.au/nla.news-article242582107 , and that 50 per cent of gross takings would go to the county, with any further balance voted to war charities 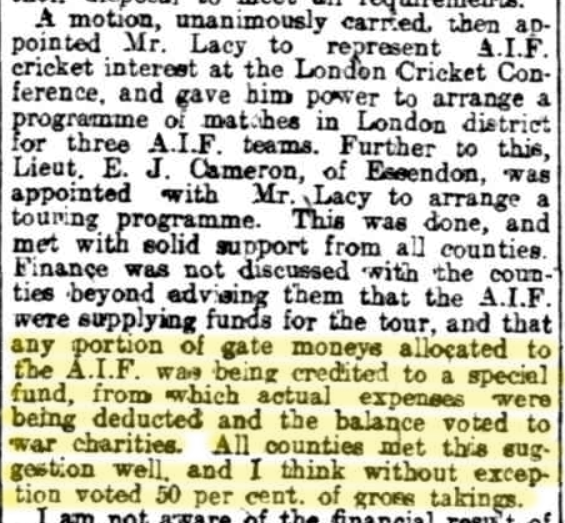 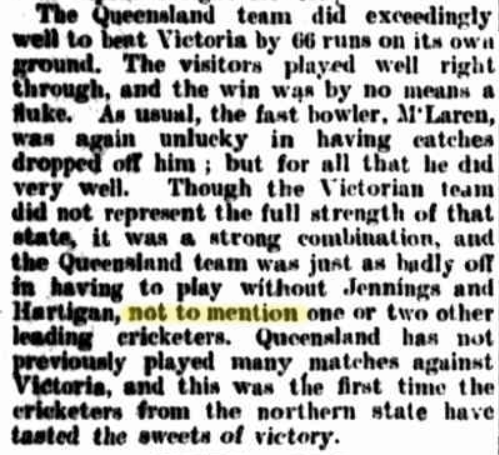 Unknown, Macartney in an Australian blazer and the Baggy Green, c. 1920s, photograph, https://upload.wikimedia.org/wikipedia/en/c/c5/CGMacartney.jpg and

George Beldam, Armstrong’s Stance at the Wicket, c. 1905, photograph, https://upload.wikimedia.org/wikipedia/commons/f/fa/Warwick_Armstrong_c1905.jpg . Many here in England, the Anzacs included, hope this won’t have a deterrent effect on the proposed substitute Test matches for which the Australians are keenly desirous

Outpost, Leaves From My Notebook, Star Green ‘Un (Yorkshire), Sat 28 Jun 1919, p. 1. . Many would like to provide them with the opportunity of showing their mettle in a match of this nature

Outpost, Leaves From My Notebook, Star Green ‘Un (Yorkshire), Sat 28 Jun 1919, p. 1. . Our boys do not claim to be of the Test match calibre, but they think they could give the English cracks a hard fight

Outpost, Leaves From My Notebook, Star Green ‘Un (Yorkshire), Sat 28 Jun 1919, p. 1. . Although it seems a Test match will likely not be forthcoming, Collins has stated he hopes that when they meet Mr. C. I. Thornton’s eleven at Scarborough, the authorities who have the choosing of the team will make it as representative as possible, so that the match may be something in the nature of a Test 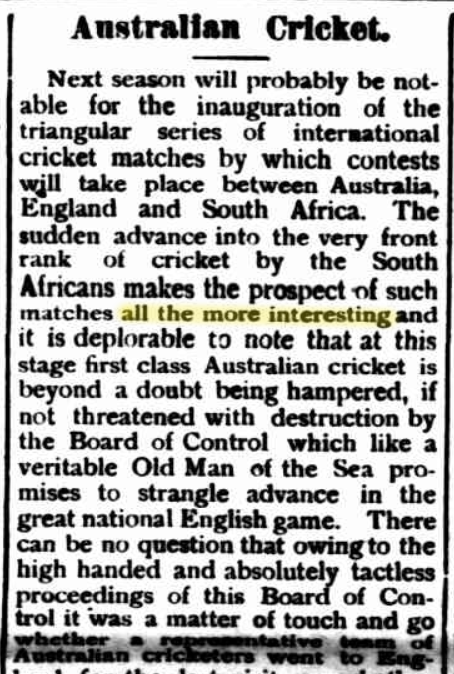 One Way of Welcoming the War-Worn, Sunday Times (NSW), Sun 6 Feb 1916, p. 10. http://nla.gov.au/nla.news-article121343452 a stump from the ground following the end of the match. It has been suggested that he burn it for the creation of an army Ashes

I have no evidence that the idea of burning the stump occurred to Pellew at the time, and it is likely that it is a later idea. Returned Soldiers to Compete for Ashes, Sporting Globe (Vic), Sat 5 Dec 1936, p. 7. http://nla.gov.au/nla.news-article189616081 .

There’s a lovely story in the debut of Albert Thomas. The Welshman was billeted at Northampton with the Welsh Division early in the war, and is now spending a leave from Russia in the town 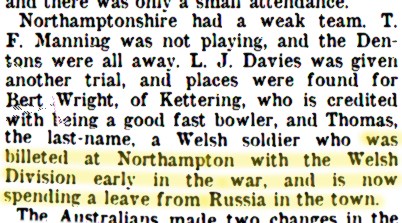 Northants v. Australians, Northampton Chronicle and Echo (Northamptonshire), Thu 26 Jun 1919, p. 5. . Under the new rules men who are serving in 1919, and will be serving in 1920, in a county regiment shall be qualified to play for that county, provided they have not played for any other county

Three-Day County Cricket, Coventry Evening Telegraph (Warwickshire), Wed 20 Aug 1919, p. 4. . This is a great initiative, as it recognises that a man’s duty may see him posted in all manner of places, and allows him to play cricket. These are the kind of rule changes the Council should be considering to help revive cricket.

Of course, the biggest story of the week is that peace has been signed in Versailles