Some say that cricket is not a game the Scots relish

Flashes and Glances, Star Green ‘Un (Yorkshire), Sat 5 Jul 1919, p. 1. , that they will never be much in the way of cricket as they like other games too much 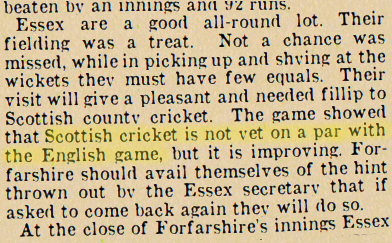 Essex Far Too Good For Forfarshire, Dundee Courier (Midlothian), Thu 29 Jun 1911, p. 6. , but the enthusiasm displayed by the spectators 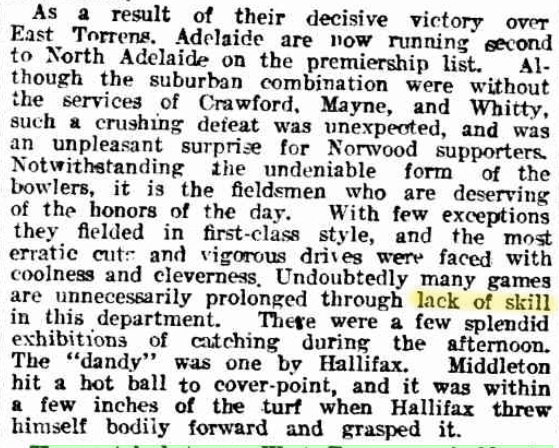 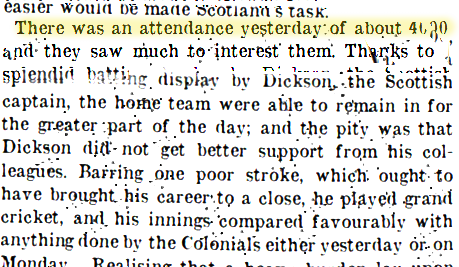 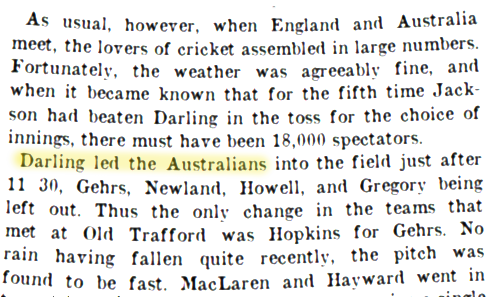 The matches have been contested in regular Scottish weather 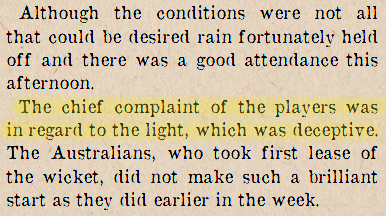 The links between the two nations 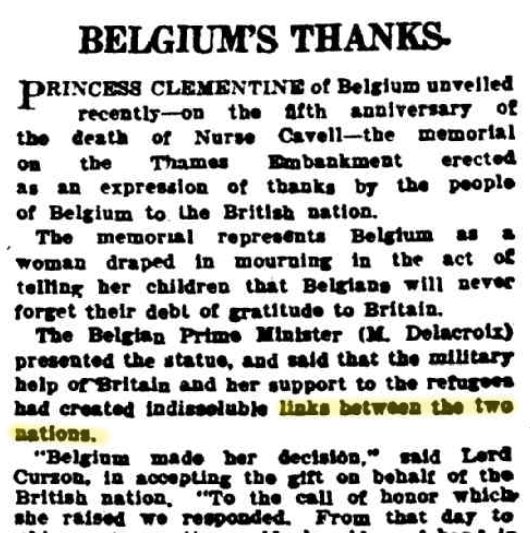 Belgium’s Thanks, The World’s News (NSW), Sat 11 Dec 1920, p. 11. http://nla.gov.au/nla.news-article128692684 were on display during a chat following the second game in Glasgow. A.W. Angus, one of the Scottish team, was found to be eligible to play for Australia having been born there. This was counterbalanced W.S. Stirling declaring that his people hail from Kilmarnock, so that he should have been playing for Scotland 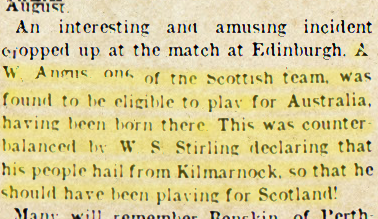 Travelling with us on this tour, and playing in the second game in Edinburgh was Cliff O’Connor 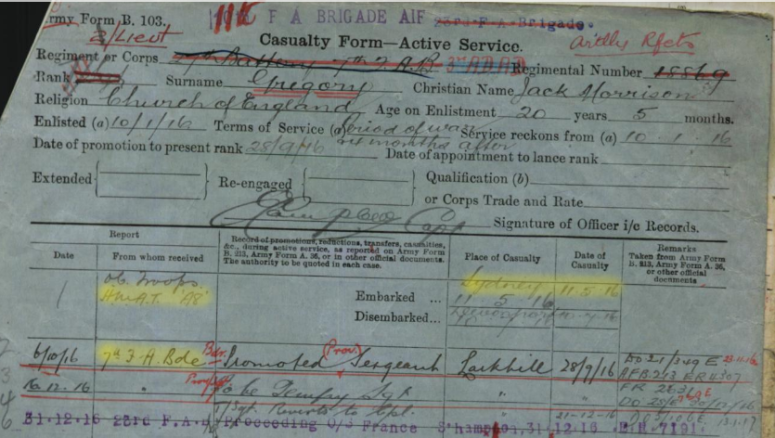 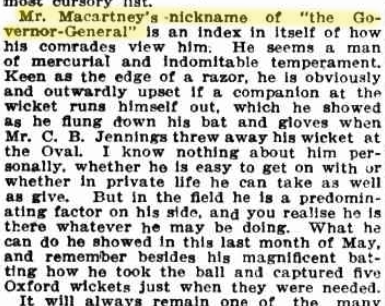 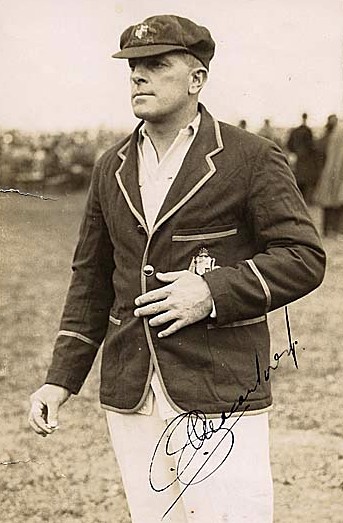 Eric Bull (right), with J. T. Murray, Unknown, Two members of the AIF Cricket Eleven, 1919, photograph, AWM D00682, https://www.awm.gov.au/collection/C389704 , in the side since the Surrey match, was another member of that illustrious brigade, and they also had amongst their ranks the Victorian shield player M. D. Hotchin

After my reporting on Kelleway some weeks ago, it’s interesting to note that Kelleway has been telling reporters that he has not yet thoroughly recovered from the effects of wounds–the last being a knock on the head from shrapnel just before the cessation of hostilities

Kelleway Retires, Advocate (Tas), Mon 30 Jun 1919, p. 3. http://nla.gov.au/nla.news-article66491346 –and that his return is in accordance with an arrangement made at the beginning of the A.I.F. tour, where he only ever intended to stay until 30 June, when his granted leave expired, and that he would play in all matches possible up until then

Free Lance, Men and Matters, Star Green ‘Un (Yorkshire), Sat 5 Jul 1919, p. 1. . My sources at HQ inform me that there was no leave approved, and that he was instead struck off strength from his secondment to the AIF Sports Control Board

NAA: B2455, KELLEWAY CHARLES, p. 6. https://recordsearch.naa.gov.au/SearchNRetrieve/Interface/ViewImage.aspx?B=7336920 , and put in for early repatriation on June 12

NAA B2455, KELLEWAY CHARLES, p. 22. https://recordsearch.naa.gov.au/SearchNRetrieve/Interface/ViewImage.aspx?B=7336920 , when the rest of the team was at Old Trafford. News is that he is due to return to Australia next week

Kelleway Retires, Advocate (Tas), Mon 30 Jun 1919, p. 3. http://nla.gov.au/nla.news-article66491346 . Word has also reached me that his former Headmaster at Forest Lodge, Mr Bardsley, was also under the impression that Kelleway had won military honours in the war

NAA: B2455, KELLEWAY CHARLES, p. 12. https://recordsearch.naa.gov.au/SearchNRetrieve/Interface/ViewImage.aspx?B=7336920 –something that could also not be confirmed with HQ

NAA: B2455, KELLEWAY CHARLES, p. 27. https://recordsearch.naa.gov.au/SearchNRetrieve/Interface/ViewImage.aspx?B=7336920 . Far be it from me to disparage

Stanley Portal Hyatt, The Veiled Lady, The Express and Telegraph (SA), Sat 8 Sep 1912, p. 9. http://nla.gov.au/nla.news-article209958181 , but I feel it important for my own journalistic integrity to publish everything and every name