This week begun at Bramall Lane 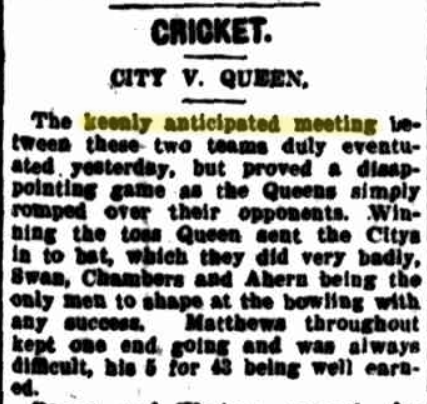 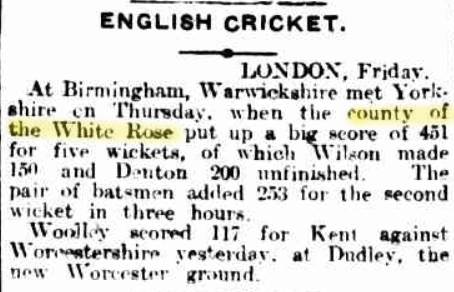 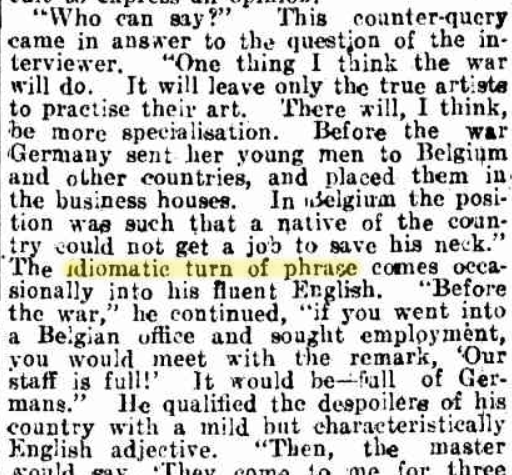 Art and Ideals, The Express and Daily Telegraph (SA), Thu 1 Feb 1917, p. 3. http://nla.gov.au/nla.news-article210633635 were initially inclined to look upon the visit as one of the least attractive of the fixtures 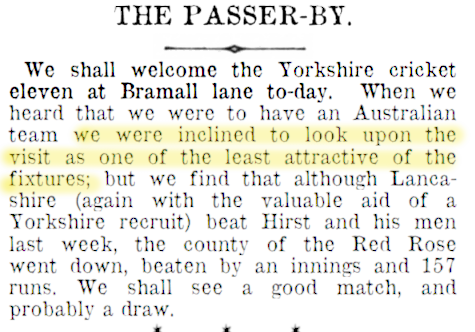 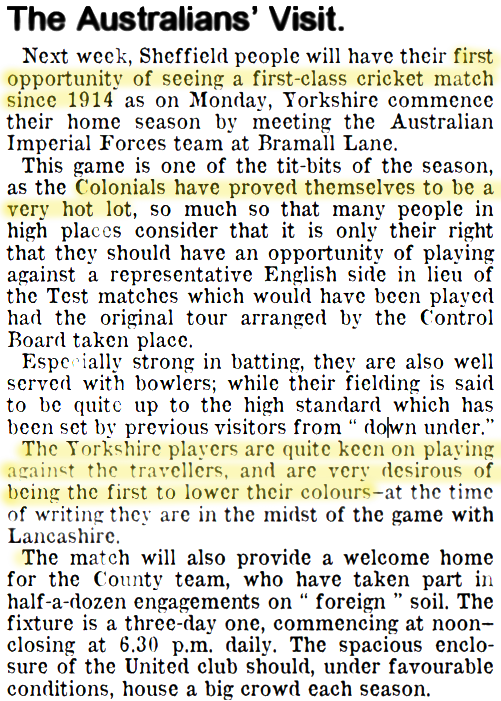 The Editor, Leaves From My Notebook, Star Green ‘un (Yorkshire), Sat 14 Jun 1919, p. 1. . The Yorkshire players are quite keen on playing against the travellers, and are very desirous of being the first to lower their colours

The Editor, Leaves From My Notebook, Star Green ‘un (Yorkshire), Sat 14 Jun 1919, p. 1. . Adding to the excitement was that this was the first opportunity Sheffield people had of seeing a first-class cricket match since 1914

The Editor, Leaves From My Notebook, Star Green ‘un (Yorkshire), Sat 14 Jun 1919, p. 1. . Except for a match with the Yorkshire Council, the county eleven have not been seen at Bramall Lane since the first month of the war, when the game with Middlesex was played after notice of abandonment had been given 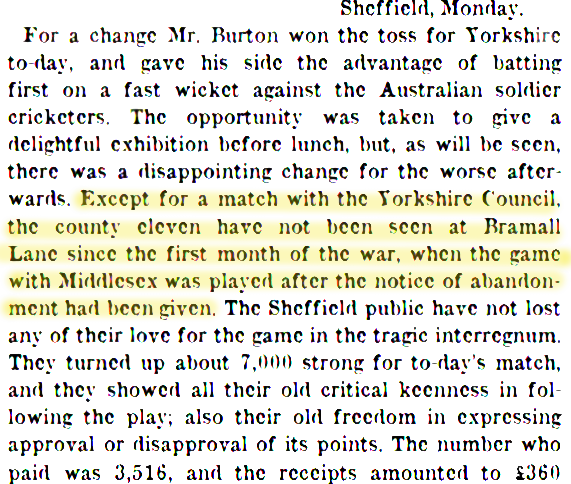 Cricket, Yorkshire Post and Leeds Intelligencer (Yorkshire), Tue 17 Jun 1919, p. 14. . Whilst some who were not cricket enthusiasts were tempted to attend the match of a visiting Colonial touring team as a matter of curiosity

Triangular Tests and County Cricket, West Sussex Gazette (Sussex), Thu 2 May 1912, p. 3. , and many others to introduce themselves to their County’s young talent

Notes on Sport, Nottingham Journal (Nottinghamshire), Thu 21 Aug 1919, p. 2. , the highlight for most of us was seeing those two doyens 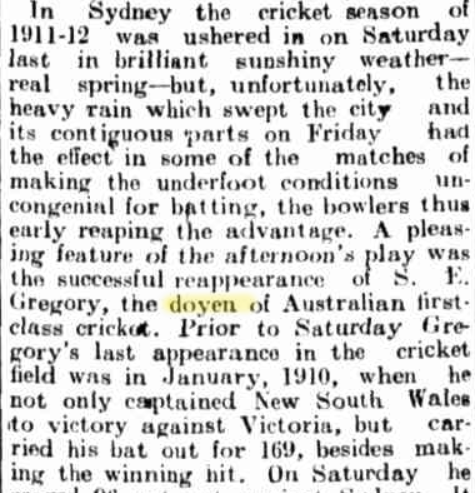 Originally I wanted to use ‘giants’ of the game, but this is definitely anachronistic. The google Ngram shows this popped up a few times not long after, but doesn’t become a common phrase until the 1960s. Likewise, ‘legend of the game’. Using ‘legend’ in the sense to refer to a great individual, as opposed to something or someone mythical, does not really come into use until the latter half of the 20th century. The phrase ‘legend of the game’ does exist from the time, but it is used in the mythical sense ‘the length bowler may shortly be a legend of the game’. Observer, Test Match Bowling, The Argus (Vic), Tue 9 Dec 1924, p. 21. http://nla.gov.au/nla.news-article2082891. The phrase ‘legend in one’s own lifetime’ first appears to describe Florence Nightingale in 1918 when Giles Lytton Strachey wrote in Eminent Victorians ‘she was a legend in her lifetime, and she knew it’. The phrase ‘living legend’ came into the popular vernacular in the USA in 1939 when Jack Dempsey, Cordell Hull, Diego Rivera, Fiedling H. Yost, The ‘lost’ Apaches of northern Mexico, and D.B. MacRae were all described as such. Gary Martin, A Legend In One’s Own Lifetime, The Phrase Finder, United Kingdom, 2019, https://www.phrases.org.uk/meanings/a-legend-in-one’s-own-lifetime.html (accessed 12 Apr 2019). In the end ‘doyens of the English XI’ was used as I could find several contemporary references, including the one shown which is about the cousin of Jack Gregory, Syd Gregory, in almost the exact same context. , Wilfred Rhodes

George Beldam, A Cricketer Seen From The Front,1906, photograph, in Charles B. Fry, Great Bowlers and Fielders: Their Methods at a Glance, (London: MacMillan and Co., Limited), p. 310. and George Hirst 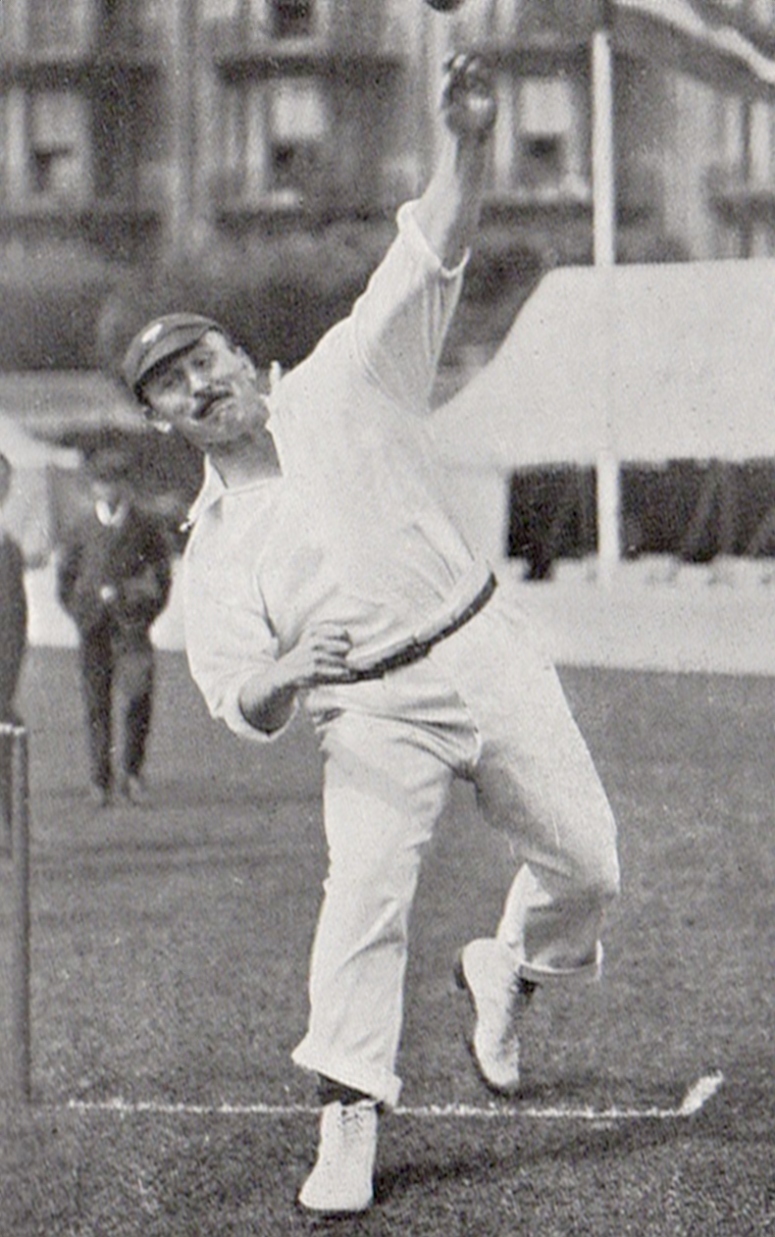 Recreated scorecard . This should have seen Yorkshire secure the win 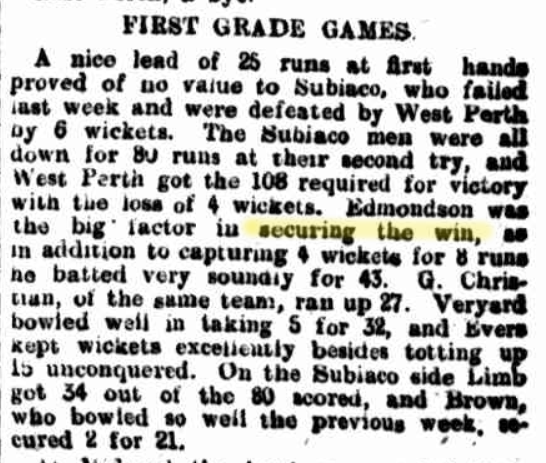 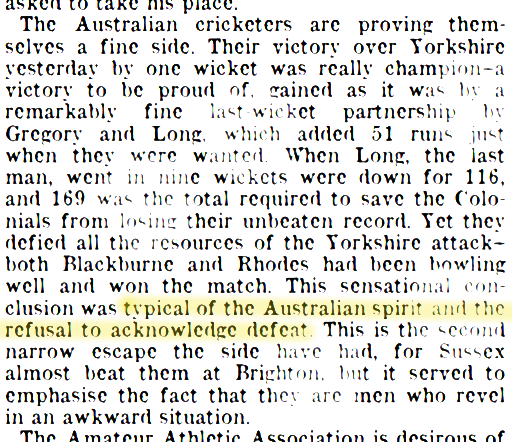 Initially I had used ‘parochial’, but at this time that word is exclusively used in a religious context. Podsnappian, from Dickens’ Mr. Podsnap, meaning self-satisfied or blinkered, was in relatively common usage in Australia during the war. Mrs. Edgworth David, Red Plague, The Globe and Sunday Times War Pictorial (NSW), Sat 3 Jun 1916, p. 12. http://nla.gov.au/nla.news-article100573457 –gave an ovation 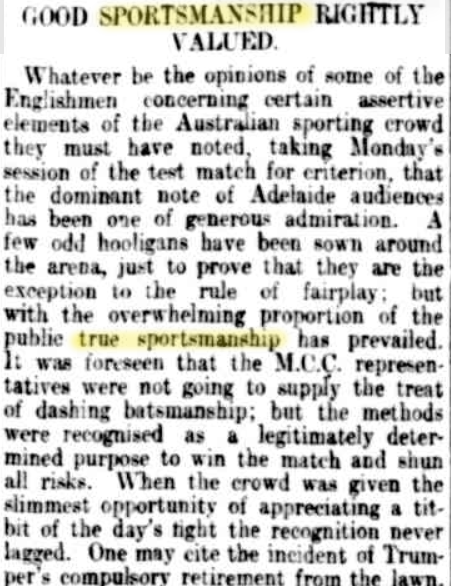 Cover-point, Australians at the Lane, Sheffield Independent (Yorkshire), Tue 17 Jun 1919, p. 6. . Although not up to the giant crowds

Many see county cricket on its trial 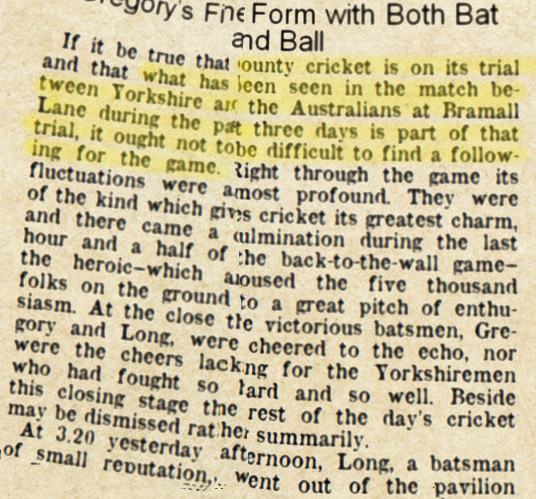 Initially ‘auditioning the popularity’, but the use of auditioning in this sense seems to come about in the second half of the 20th century. On searching for ‘revealing the anxiety’ I found many contemporary examples, most of which are referring to the anxiety of the German newspapers over the war. I have chosen to use this phrasing to highlight the anxieties of Australians in 1916 as shown in the article quoted following, against those perceived to exist within the German populace at the same time. In doing so I hope to highlight the incongruity of the Australian experience of the war and sport. Conquest or Ruin, Geelong Advertiser (Vic), Tue 15 May 1917, p. 3. http://nla.gov.au/nla.news-article119724869 for the resumption of international contests

J.W., Cricket, The Australasian (Vic), Sat 7 Oct 1916, p. 25. http://nla.gov.au/nla.news-article140699917 . If what has been seen in the match between Yorkshire and the Australians at Bramall Lane during the past three days is part of that trial, it ought not to be difficult to find a following for the game

Cricket, Sheffield Daily Telegraph (Yorkshire), Thu 19 Jun 1919, p. 9. . Indeed, some local cricketers who were watching the Yorkshire-Australian struggle declared that it is years since they endured such exhilarating agony. They could not sit still

This is a transcript of a toast Sir Archibald Weigall, Governeor of South Australia, gave at a valedictory dinner for the 1920 English Ashes side. The surrounding context gives an interesting perspective on Australian crowds by an English Aristocrat. Point, Englishmen’s First Win, The Age (Vic), Wed 10 Nov 1920, p. 9. http://nla.gov.au/nla.news-article206941613 ! As Ted Long was about to take the arena, a member of the crowd facetiously said “I’ll bet you a fiver Australia is beaten.” Ted stopped and clinched the bet and then strode to the wickets. He walked up to Collins and said ‘A guy bet me a fiver we wouldn’t do it so I’ll hold up my end while you make the runs’. The bet was won and Long and Collins saw that no one paid for a drink until a check of accounts showed that the fiver had been spent.

The spirit of the A.I.F. has not left the lads 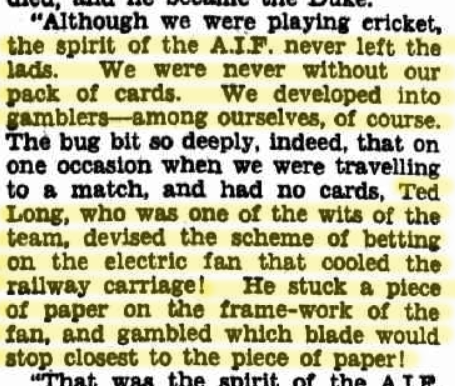 W.A.S. Oldfield quoted in J. Mathers, The Diggers Make a Team, The Daily Telegraph (NSW), Sat 27 Apr 1935, p. 6 http://nla.gov.au/nla.news-article246691864 . We’ve developed into gamblersThe journalist including himself in the ‘we’ of the team is a deliberate muddying of roles, highlighting both the shared experience of war, as well as the sometimes blurred lines of the embedded journalist –among ourselves, of course. The bug has bitten so deeply, indeed, that on the trip from one end of the nation to the other to get us to Hampshire, finding ourselves without a deck of cards, Ted Long, who is one of the wits of the team, devised the scheme of betting on the electric fan that cooled the railway carriage! He stuck a piece of paper on the frame-work of the fan, and gambled which blade would stop closest to the piece of paper 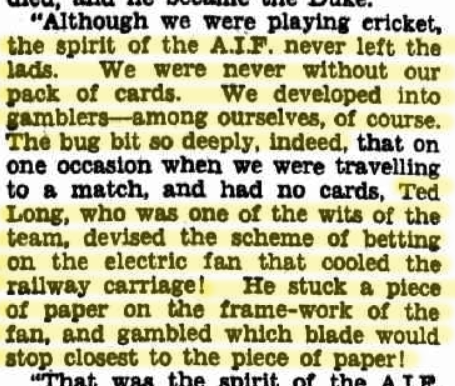 The Hampshire game saw the young former Eton boy, if one can still call him a boy given his service–three times wounded and twice mentioned in despatches 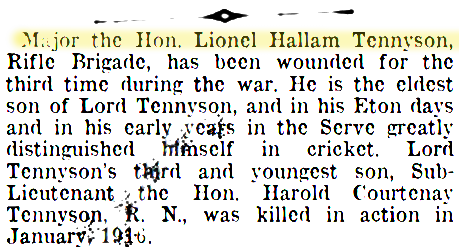 Unknown, The Right Honourable Lord Lionel Hallam Tennyson, Hampshire County cricket team, c. 1922, photograph, https://upload.wikimedia.org/wikipedia/commons/e/ef/Lionel_Hallam_Tennyson_c1922.jpg , grandson of the poet of that name, play his first match against an Australian side. The war claimed so many of the county’s cricketers as victims that they have had practically to rebuild the team 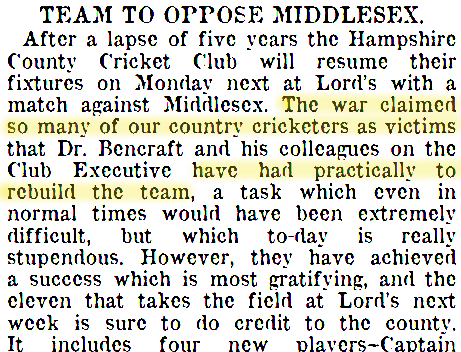 Hampshire’s First Match, Hampshire Advertiser (Hampshire), Sat 7 Jun 1919, p. 6. . In total they lost at leastNot all of the Hampshire players lost are listed as playing for Hampshire in the Death Roll of Sport (DROS – see following popups), but they were all reported as playing for Hampshire at the time they played. Additionally, there are a number of players missing from the DROS. Along with the 17 listed in the DROS is Gordon Belcher, whose death was reported in 1915. Captain G. Belcher, Reading Mercury (Berkshire), Sat 29 May 1915, p. 2. Not included in this number, but listed on the Hampshire County Cricket Club Roll of Honour memorial (date unknown) are C.N. Stucliffe and H. Rogers. The most comprehensive list, not published until 2014, lists a total of 24 Hampshire players who died, and also includes a photograph of the monument. The players on this list not already mentioned did not have their deaths reported in contemporary sources. Andrew Renshaw (ed.), Wisden on the Great War: The Lives of Cricket’s Fallen 1914-1918 (London: Wisden), 2014, pp. 22-23. The confusing nature of these lists helps to highlight the still chaotic nature of news around causalities of the war in 1919. 18

This list helps to show the full extent of the cost of the war in the U.K. The Death Roll of Sport, Special Supplement to The Field, July 1919, pp. 22-3. Click to open in a new window: https://anthonycondoncom.files.wordpress.com/2019/04/dros-11.jpg first-class cricketers Dave Allen, Honours Board, 2019, photograph, https://anthonycondoncom.files.wordpress.com/2019/06/hampshire-honours-board.jpg supplied personally courtesy of Dave Allen. More than the 15 lost Australian Sheffield Shield playersThis is the number published by the Australian Cricketers’ Association in 2018, however, in June of 1919 – the time of this article – all of these deaths had been reported on in the Australian press. This presents a striking difference to the Hampshire players, many of whom were not reported on as having been killed by June 1919. ACA remembers fallen first-class cricketers, Australian Cricketers’ Association, Australia, 2018, https://www.auscricket.com.au/news-media/news-articles/aca-remembers-fallen-first-class-cricketers (accessed 14 Apr 2019). . Such was the depletion of the Hampshire side that Ledger Hill

‘First saw action’ as a military phrase comes into use in the First World War, and is used in several soldier’s letters published in newspapers in Australia and the U.K. It is never used outside of the description of a military engagement in this period; however, given the hypothesis tested by the quantification section, I have indulged in using this section to make a plausible creation of a term that becomes quite common following the Second World War. As the ngram shows, this phrase comes into popular use towards the end of the war before petering out in the 30s, and then having a massive spike in use in the Second World War, and again during the Vietnam War. against Australians playing for Cambridge

Unknown, Billy Murdoch c. 1895, c. 1895, photograph, https://upload.wikimedia.org/wikipedia/commons/7/79/Billy_Murdoch_c1895b.jpg side in 1890 and hasn’t regularly played for Hampshire since 1911. Another young Hampshire man, Dallas BrooksThis is the same Dallas Brooks who goes on to be Governor General of Victoria from 1949-1963, got a deserved pat on the shoulder from our Anzacs when they discovered he had been wounded fighting alongside a number of them at Gallipoli 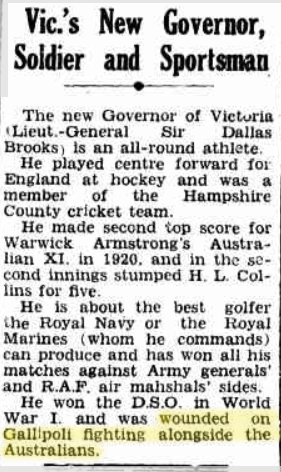 My first sense was that using ‘cheeky’ like this is a bit anachronistic. However, on examination the phrase ‘a cheeky single’ (to mean taking one run when there probably shouldn’t have been a run there to take) came into the cricket lexicon by at least 1892 (top) in the UK and 1905 (middle) in Australia. Therefore, although ‘cheeky mention’ may not have contemporaneous examples, I feel it is legitimate in this sense to use, as the journalist is repurposing a cricket phrase to describe a conversational equivalent of a ‘cheeky single’. Having an example that happens to mention Kelleway (bottom) is a happy bonus, that also shows it was in contemporary use.
Top: To-Day’s Cricket, Derby Daily Telegraph (Derbyshire), Fri 15 Jul 1892, p. 3.
Middle: Victoria Second Innings, The Bendigo Independent (Vic), Fri 15 Dec 1905, p. 4. http://nla.gov.au/nla.news-article223512150
Bottom: Inter-State Cricket, Saturday Referee and the Arrow (NSW), Sat 27 Dec 1913, p.2 http://nla.gov.au/nla.news-article117418176 mention that he also had been wounded in the desert

NAA: B2455, PELLEW CLARENCE EVERARD Page 46 of 55, https://recordsearch.naa.gov.au/SearchNRetrieve/Interface/ViewImage.aspx?B=8015043 later in the war, and knew some of the men who served with Docker in that unit in Egypt, suggested he didn’t deserve any medals for it as he had fallen off his horse riding in the camp

Hampshire v. Australians, Aberdeen Press and Journal (Aberdeenshire), Mon 23 Jun 1919, p. 7. , but I wouldn’t be surprised to see him gracing our fields

Matches Postponed, Dundee Courier (Angus), Sat 21 Jun 1919, p. 3. finally broke on the first day, meaning no cricket could be played, so the two-days match ended in a draw.