After the match against the old men

Cricket, Derby Daily Telegraph (Derbyshire), Fri 25 Jul 1919, p. 2. at Attelborough, the team entered upon the serious work of the tour

Essex v Australians, Gloucestershire Echo (Gloucestershire), Sat 17 May 1919, p. 6. against our first County in the form of Essex. It was not only our first important engagement, 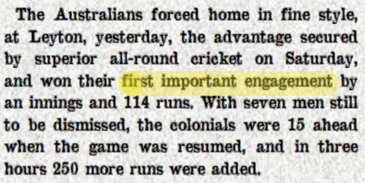 Essex v. Australians, Leicester Daily Post (Leicestershire), Tue 20 May, 1919, p.4. and Essex’s first game since 1914, it was also the first opportunity many of us had to see whether the enthusiasm for the grand old game of cricket

England v. Australia, Manchester Evening News (Lancashire), Fri 13 Jun 1902, p.2. on the first day. Although Essex have a nucleus of pre-war players, they were able to bring out some sound young

County Cricket, Sheffield Daily Telegraph (Yorkshire), Thu 17 Apr 1919, p.7. men I’ve changed the original quote from ‘players’ to ‘men’ because there is more in between the two parts of the quote in the original, but here it sounds odd to repeat ‘players’ in the same sentence. . The ‘Cornstalks’

Unknown, A vintage cigarette card featuring cricketer Charles Kelleway of New South Wales, circa 1920, c. 1920, Cigarette Card, https://upload.wikimedia.org/wikipedia/commons/7/79/Charlie_Kelleway_card_c1920.jpg defended with skill on his way to the first century of the tour, while 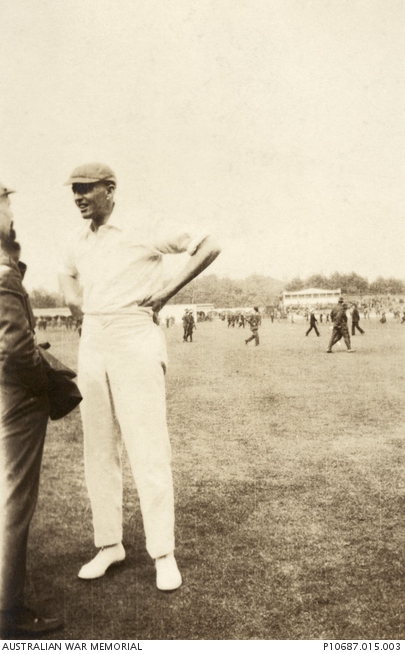 Innings Victory for Colonials, Sheffield Independent (Yorkshire), Tue 20 May 1919, p.9. The fielding of Essex cricketers did not anything like approach that of the Australians. It was not bad; it was slack, for the most part without life, and never a warm source of encouragement to the bowlers.

Following the game, in accord with “new world” ideas, there were brief speeches and sporting fraternisation

Leslie Ward, Men of the Day No.1027: Caricature of The Rev Frank Hay Gillingham, 1906, painting, https://upload.wikimedia.org/wikipedia/commons/4/4a/Frank_Hay_Gillingham%2C_Vanity_Fair%2C_1906-08-15.jpg, as fine a specimen of muscular Christianity as anyone can wish to meet

Sir Home Gordon, Rev. F. H. Gillingham and Other Cricketers, The Tatler (London), Wed 22 Jun 1919, p.32.. He is a fine preacher, but his reputation on the cricket field gives him a better chance of saving souls than all the eloquence in the world.

Crushing Defeat, Sheffield Independent (Yorkshire), Sat 24 May 1919, p.10 had already had a few trial matches to find their form

Crushing Defeat, Sheffield Independent (Yorkshire), Sat 24 May 1919, p.10 down to a lack of practice on the local’s behalf. But our boys

Elsie G. Thompson, Our Boys, Wellington Times (NSW), Thu 10 Apr 1919, p.3. http://nla.gov.au/nla.news-article143234190 I have included the entire poem here as it is a good example of the language around sport and the military during the war. have been fighting too, and have not allowed their cricket to grow rusty; they have found time to play the game, and fight as well. 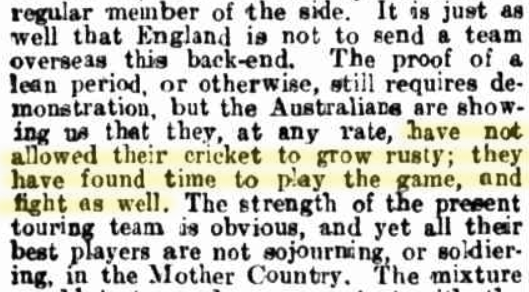 Although the wickets are of the English variety

The Australians’ Success, Yorkshire Post and Leeds Intelligencer (Yorkshire), Mon 26 May 1919, p.10. , it’s been quite dry for May in England, and our lads 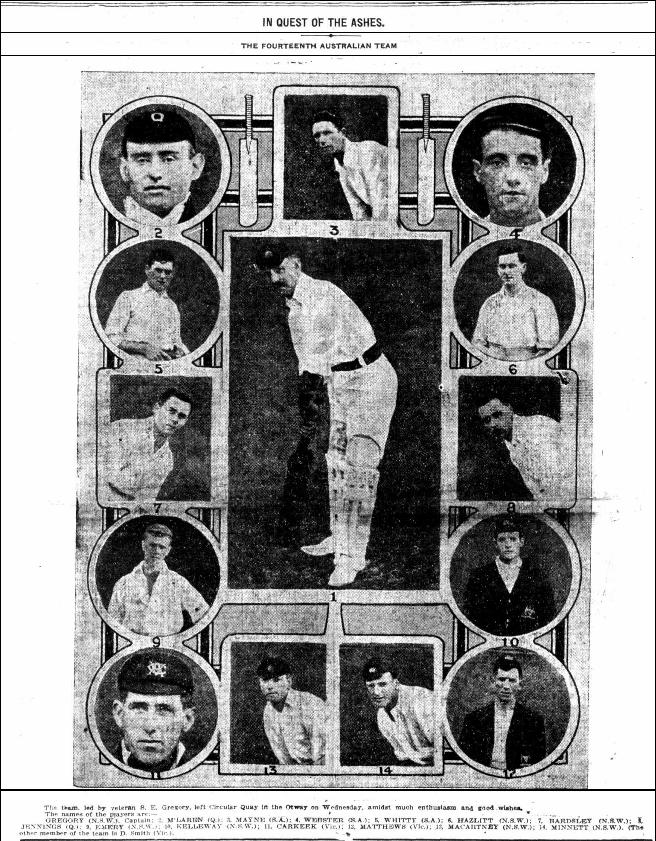 A Chapter of Accidents, Lancashire Evening Post (Lancashire), Fri 15 Aug 1919, p.5. although it’s what Australians grow up on. 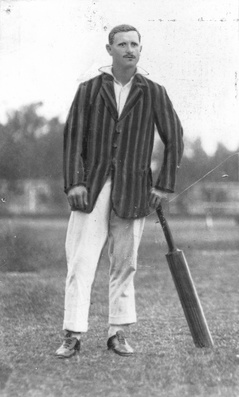 The Australian’s Tour, The Sportsman (London), Fri 23 May 1919, p.1. in his first match of the tour at Fenner’s. Even in a team, there is sometimes need for some exceptional personal feats; something the Military Cross 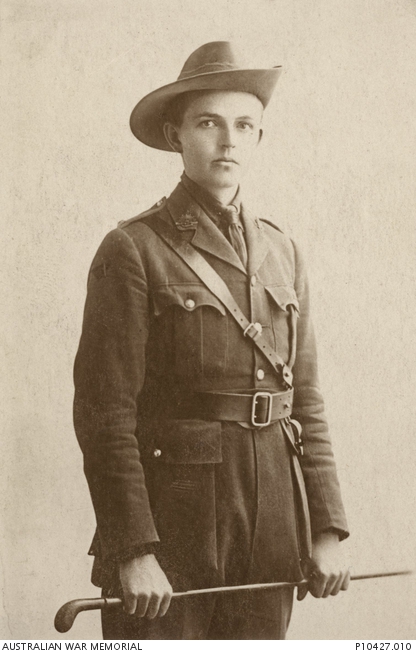 Unknown, Studio portrait of Second Lieutenant (2nd Lt) William Leo Trenerry, 19th Battalion, 1916, photograph, https://www.awm.gov.au/collection/C1285387 uniform can vouch for–or perhaps the men he saved, as he wielded his Lewis gun in the trenches of France like he wields his willow

Kelleway 168, Daily Herald (London), Thu 22 May 1919, p.7. Young Jack also provided another one of the highlights of the game, dismissing Morrison and Morris with successive balls, sending their stumps flying through the air

The Australian’s Tour, The Sportsman (London), Fri 23 May 1919, p.1. like the battered great trees of Flanders.

Flashes and Glances, Star Green ‘Un (Yorkshire), Sat 17 May 1919, p.1. he gave the Light Blues a fright by clean bowling five of the six wickets to fall whilst only 30 runs were added

Fine Last Wicket Stand, Sheffield Daily Telegraph (Yorkshire), Fri 23 May 1919, p.7.. Thanks to a fine last wicket partnership on the part of Rotherham and Naumann, the Light Blues after all did not make a very bad response to the formidable total put together by the Australians.

Fine Last Wicket Stand, Sheffield Daily Telegraph (Yorkshire), Fri 23 May 1919, p.7. It was not to be, however. The Diggers

Cambridge University v. Australians, The Scotsman (Midlothian), Sat 24 May 1919, p.11. allowing us all to retire to the pavilion

“Aussies” Bright Play, Nottingham Journal (Nottinghamshire), Thu 22 May 1919, p.3. have wins against two first-class sides under their belt, they have showed they are a lot better side than some of the critics appeared to imagine.

Flashes and Glances, Star Green ‘Un (Yorkshire), Sat 24 May 1919, p.1. The English were looking favourably upon a return tour later this year,

First-Class Cricket, Globe (London), Fri 3 Jan 1919, p.15. but must be reconsidering it now, given that several of our best players have already returned “home”–if that is the correct term to employ

The Australians’ Tour, The Sportsman (London), Tue 16 Sep 1919, p.1.–not to mention those who did their service on the home front. The matter is now under consideration

The M.C.C., Hampshire Advertiser (Hampshire), Sat 3 May 1919, p.7. with the M.C.C. committee, and we should have a decision in the next few weeks. So well have the Aussies done that a match between them and an England XI is mooted.

Reviving Cricket, Chelmsford Chronicle (Essex), Fri 9 May 1919, p.6. such an idea has merit, even if it is not a Test match.