Unfortunately, our planned brief tour in Ireland, with two or three matches interspersed fell through

Unknown, Woodbrook Cricket Ground, unknown, photograph, https://www.cricketeurope.com/IRELAND/VENUES/WOODBROOK/index.shtml at Sir Stanley’s ground at his estate in Bray, with a second game against the Gentlemen of Ireland 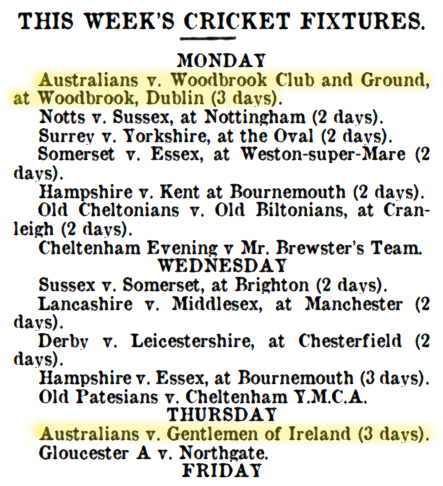 This Week’s Cricket Fixtures, Gloucestershire Echo (Gloucestershire), Mon 11 Aug 1919, p. 1. . This is possibly fortunate, given all the discontent and trouble

Our delightful host in Scotland was Mr. Peter Dawson, the manufacturer of Dawson’s whisky

Cricket, The Express and Telegraph (SA), Thu 4 Sep 1919, p. 2. http://nla.gov.au/nla.news-article210600255 , who arranged a most comprehensive motor tour for two weeks through the beauties of Scotland, including the Trossachs, the lochs, and even as far north in the Highlands as Inverness

”Bert” Oldfield Talks About Cricket, Examiner (Tas), Mon 4 Apr 1938, p. 9. http://nla.gov.au/nla.news-article52199819 . Following a visit to the famous shipbuilding yard of Messrs Denny and Co., Ltd., Dumbarton, where we all had the pleasure of going over the latest submarines, we attended a garden party at the grounds of Poloc Cricket Club at Shawholm

A Trip To The Highlands, The Express and Telegraph (SA), Thu 6 Nov 1919, p. 4. http://nla.gov.au/nla.news-article210604478 . We were also guests of the Duke of Athol at Blair Athol Castle, who personally conducted us round his historic residence, pointing out all its most notable features

Of course it wasn’t all lochs and whisky! Most of our time in Scotland was taken up by sight-seeing, but a couple of one-day matches were fixed up

Greenock v Australians, The Scotsman (Midlothian), Thu 14 Aug 1919, p. 6., a century by our host Mr. Kerr to go along with his five wickets for 62, and Collins mopping up eight Greenock wickets at a cost of only 39 runs 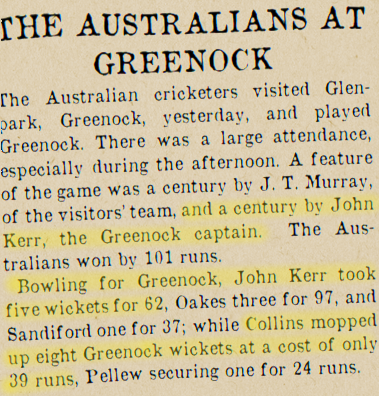 The Australians At Greenock, Dundee Courier (Angus), Thu 14 Aug 1919, p. 6.. The second match was against a team of fifteen representing the North of Scotland at Inverness, who were not expected that they would make much of a stand against the Australians. Their bowling and their fielding–twelve men took the field–proved quite satisfactory. It was when the North men went to the wicket that the real difference between the teams became apparent. The bowling of Collins and Winning did not give the North men a chance of settling down to make a score. Clever and resourceful bowling was supplemented by the smartest of fielding, and the North fifteen were all out for 36. As there was still an hour to go, the Australians went to the wicket a second time. Their batting was then in the nature of an exhibition such as is seldom seen in the North of Scotland. Free batting all round the field was the order of the evening. In 35 minutes the score had passed the 100 mark. Sixes were hit by Docker, Murray, and Bull, and they and Ernie Cameron, who carried his bat, had 146 runs to their combined credit. The Australians’ batting roused the spectators to enthusiasm, and it may be expected that the visit will have an encouraging effect on the game in the North

League Football, Weekly Times (Vic), Sat 11 Jun 1910, p. 27. http://nla.gov.au/nla.news-page23615119 , has been the moving force behind the scenes on the tour, and his personality has been a big factor in making the A.I.F. team the happy family that has been so much lauded 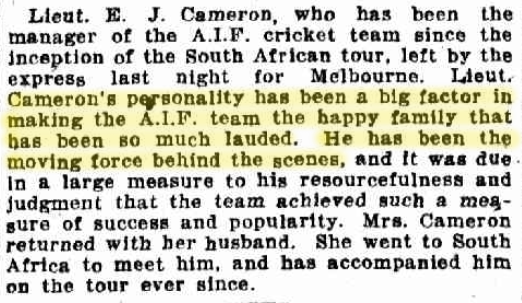 There was some other news regarding our fixtures this week. Firstly, the A.I.F. boys will play a South of England at Portsmouth, and not Hampshire, as originally arranged

Sport of the Week, Northampton Mercury (Northamptonshire), Fri 8 Aug 1919, p. 11.. This is high praise for the quality of the team, and a chance for us to prove our mettle after the defeat to the Gentlemen of England. It has also been announced that the South African Cricket Association has requested the High Commissioner in London to negotiate a visit South Africa